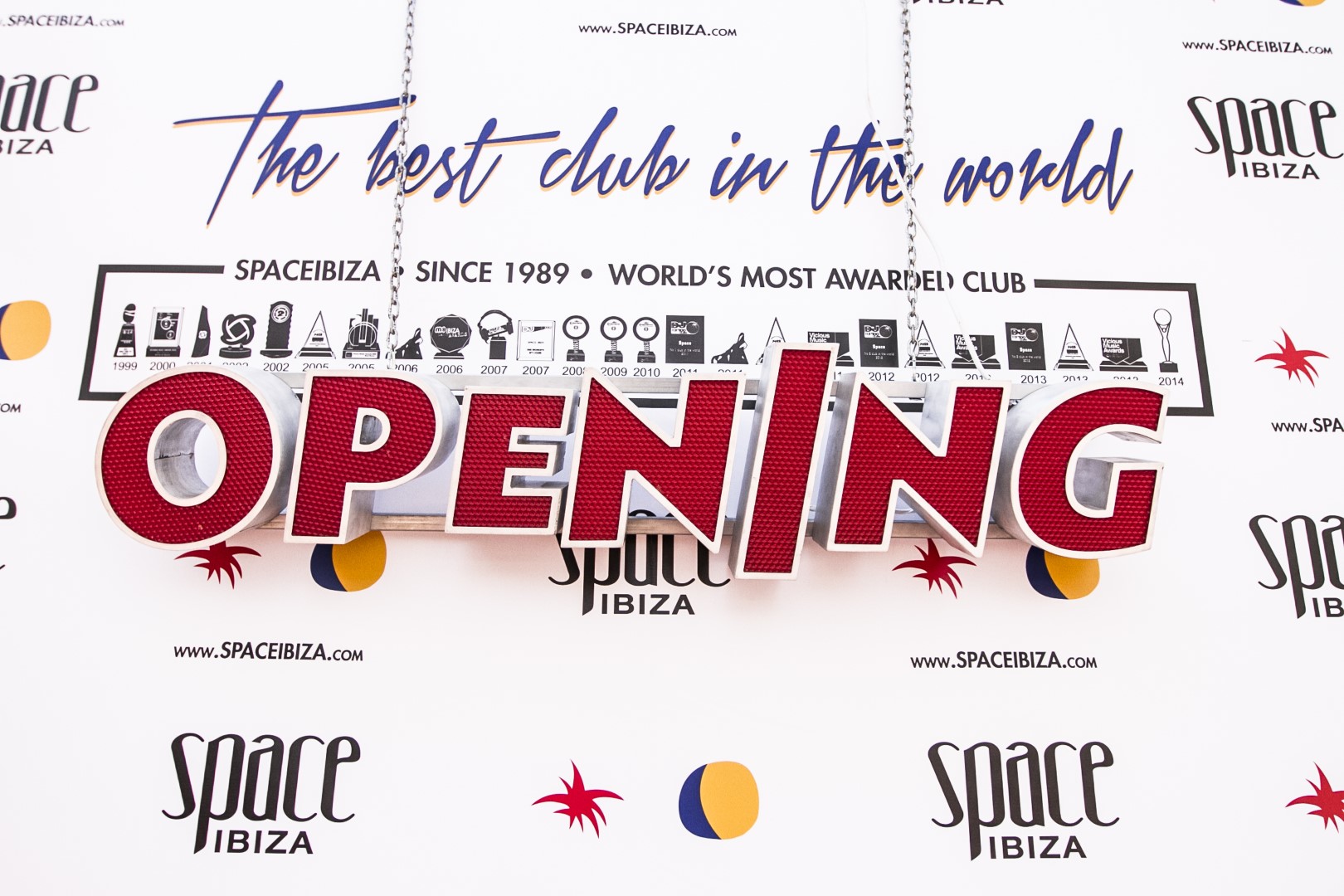 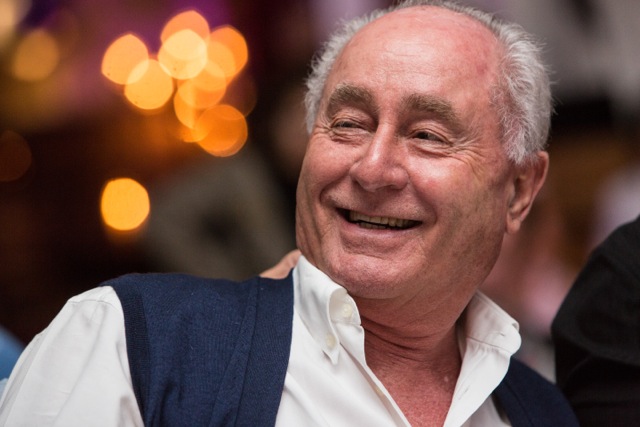 Summer clubbing in Ibiza has become a synonym of Space Ibiza. No visits to the White Island are completed unless they include the experience of a party at Space. What makes this club so special – a club located in the middle of a big car park in Platja d’en Bossa? What kind of club can cause that massive pilgrimage year after year at their opening and closing parties? Space Ibiza is considered by many as no less as the Mecca of electronic music. It is a club which has become one of the funniest places in the world for lots of people, a second home for music lovers from the five continents.

Pepe Roselló, a devotee of opera, has been the driving force of Space Ibiza since its beginning.

Pepe has always been a club owner, beginning with Playboy in Sant Antoni as early as 1963. He explains he began in the late 50s and the early 60s, when the first hippies arrived from the USA escaping from the Korea and Vietnam wars. His eyes light up when he remembers the incredible music freedom they brought to the island, a mixture of different styles and music cultures, and even more important, their great wish to celebrate their love for music. Suddenly, the first bars that opened on the island were packed with people to listen to this new and exciting music wave - La Tierra, Mono Desnudo and Graffiti.

At that time, Spain was under Franco’s dictatorship, with strict directives about importing foreign recordings and live music made by groups who were not Spanish, threatening to take this new music revival back to the underground. But even in that repressive atmosphere, a group of businessmen on the island (“crazy about music”, quoting Pepe) rejected that isolation and in 1973 Pachá opened, soon followed by Es Paradís, Amnesia and Ku. In the mid-80s, Pepe was convinced that the future was in the hands of these great clubs – they were the only ones able to make it commercial, to bring live performances of bands for an eager audience.

In 1989 Pepe took over Space Ibiza in Platja d’en Bossa. The first big challenge was to change the perceptions that people had about the area, which was mainly a family resort, and to atract them from the route of the main clubs - Sant Antoni (Es Paradís), Ibiza (Pachá) and the main road between them (Amnesia and Ku- now Privilege).

A complete music devotee, Pepe knew very well what people could do to listen to the music they liked, and he saw the potential to open when the other clubs were closed. At that time, under the Spanish law, all the establishments had to close at least two hours a day, so he decided to open the club with two sessions: an evening one, closing for two hours and making people leave the club, while he took advantage of this to replace cameras and to clean the club, so that later people could come in again.

The entertainment policy was a mixture of variety shows from those early years – Mr. and Miss Space, Miss Ibiza and Formentera, live bands, flamenco performances – a view which is far from the present electronic view. It was still a formula to work on to rise the club's popularity. In 1991 a young English DJ called Alex P had the idea of setting up a roof behind the bar to play for the audience more peacefully so people could enjoy their drinks on a chill-out terrace. Two years later, Brandon Block joined him and as a result of this union the Space Terrace was born.

The rest, as the saying goes, is history.

Together with the growth of the club, the culture of the DJ sound appeared inevitably. Pepe affectionately remembers one of his first parties in Ibiza in 1994, inviting international DJs: the promotion to introduce Red Bull in Ibiza, led by Sven Väth and Marc Spoon, indisputable kings of the Techno and Trance scene.

From that moment on, big parties were organized: Up Yer Jonson with Sasha, Renaissance with Dave Seaman and John Digweed, React with Carl Cox, and even live performances with Erick Morillo like Reel 2 Reel, without forgetting the famous Space Ibiza Opening and Closing parties, which have been and still are today the parties that mark the beginning and the end of the season in Ibiza.

We cannot forget the Space Ibiza residents on Sundays, Brandon Block and A., who soon made their sessions the favorite ones on the whole island.

Space Ibiza is all about music. All the most important international DJs have visited the club. One of the main reasons for this great success has been the excellence and continuity of the club's resident DJs – versatile artists such as Reche, José de Divina and Tania Vulcano, as good as the most recent incorporations, Jon Ulysses, and, of course, Steve Lawler. They are the only ones who really understand the Space Ibiza crowd, the only ones who know what to play and when to do it. The Platja d'en Bossa club is in very good terms with many international DJs, to the extent they have grown up in there, bringing now the same energy and affection as ten years ago. The exclusive treatment and care for customers was also a distinguishing feature of the club. Celebrities and mortals shared the dance floor and really indulged themselves, with no rules as for clothes or condition, releasing a spirit of freedom, joy and good vibrations which is still being kept intact nowadays.

The Space Ibiza myth became so powerful that many DJs asked to work there without being paid. Just watch the close relation between the club and many of the most important DJs, such as Carl Cox, Sasha, John Digweed, Steve Lawler, Erick Morillo and many others, who say, after 23 years, that Space is still the club where they love playing.

Just when everybody thought Space Ibiza could not be greater, the club announced its 22-hour sessions of continuous party on Sundays - almost a non-stop day! Back in 1999, the sessions at Space Ibiza ended at 8PM on Sundays: "Where are we going now?", everybody asked when they left the club. Undoubtedly, a longer party could perfectly work. The question was how to do it. With the joint collaboration of Darren Hughes, Danny Wittle and Space, those 22-hours marathon sessions were born, from Sunday at 8AM to Monday at 6AM, with many different DJs and styles, offering people the chance to choose from what they liked most and the place they preferred - on Sunday morning in the Main Room, in the evening at the Sunset Terrace, or even combining all of them.

And the job was done were awarded “Best Club Night” in 2002 in the Dancestar awards.

Following this great clubbing revolution, a complete remodelling of the DJ booths was carried out, both inside and outside in the 1999/2000 winter. Traditionally, the DJs on the terrace played behind the bar on the left of it, becoming invisible from the dance floor. On a hot Sunday evening in August 1999, to celebrate the BBC Radio 1 weekend, a place for the DJ was set up at the end of the terrace. Carl Cox, Mousse T and Boris Dlugosh played for a delighted crowd. Carl’s session won the first prize for the Best Session of the Year by the English BBC Radio. The interaction among Space Ibiza, DJs and audiences in the UK and the whole Europe began to increase. Then the present booth for the DJ was built. Inside, something similar happened, with a big booth at the back of the club presiding the main room. As a result of all these improvements and the effort made by the Platja d’en Bossa club year after year to create the perfect conditions to enjoy music, Space Ibiza was named the Best Club in the World for the first time in the 2001 Dancestar awards. 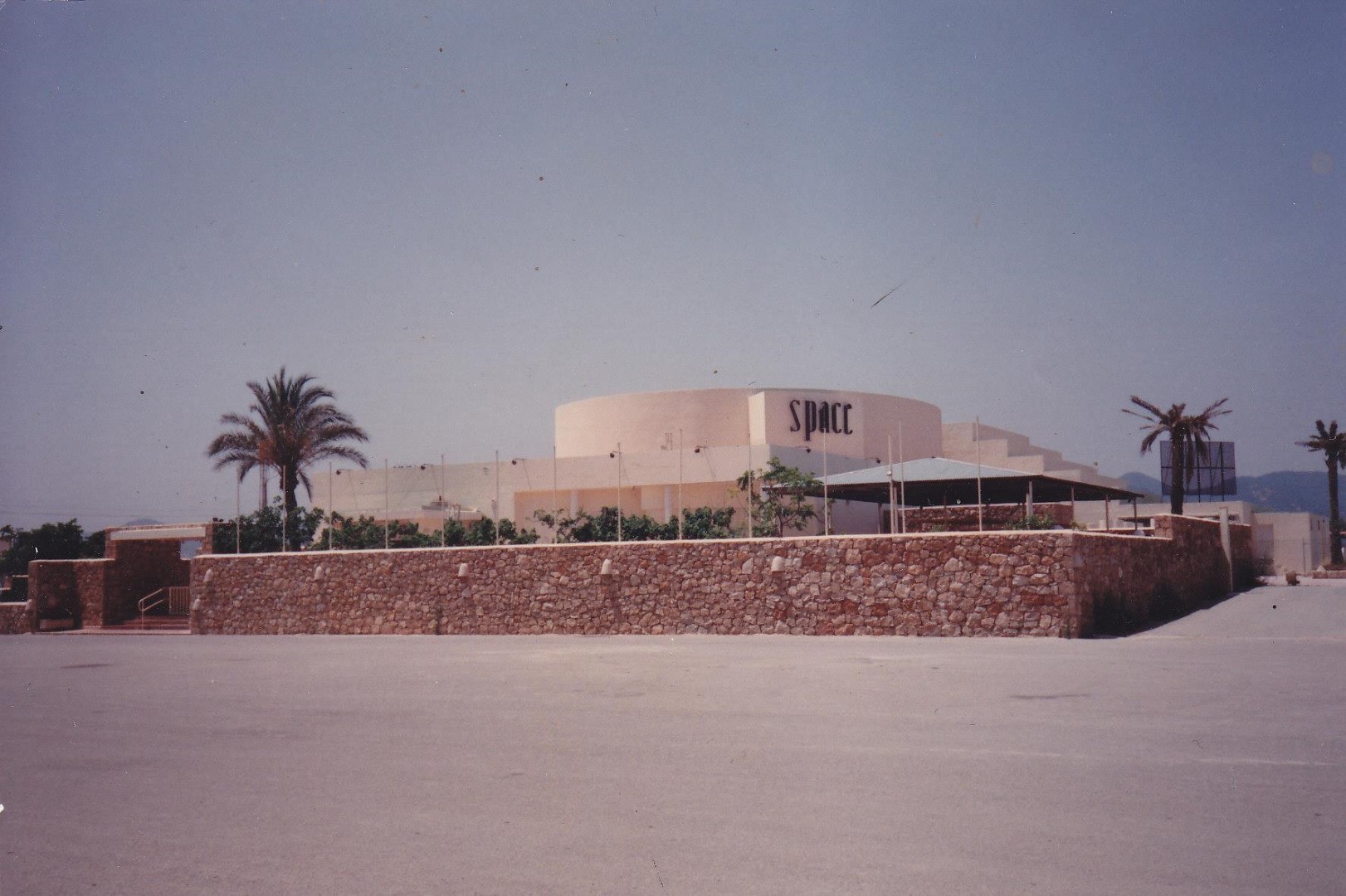 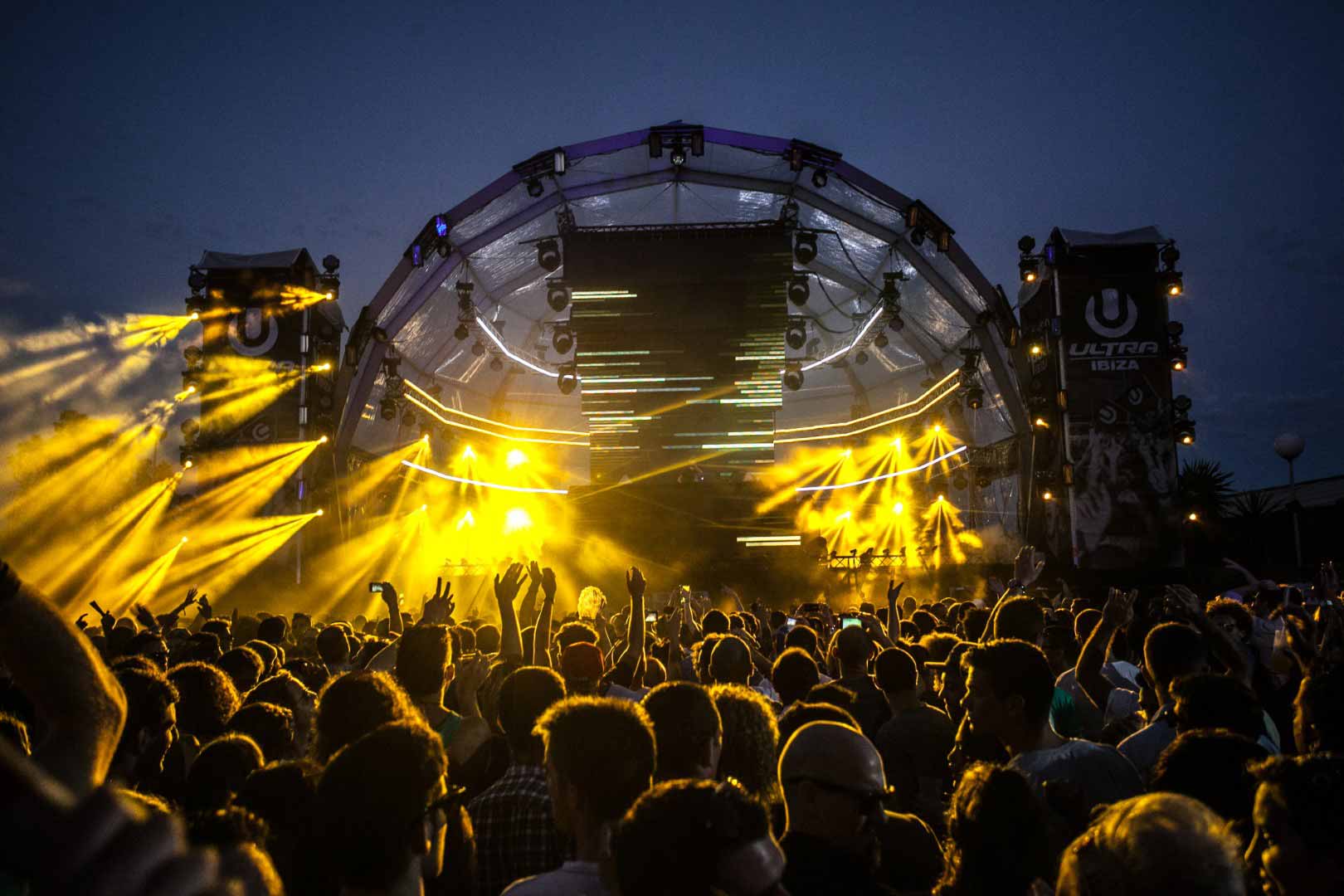 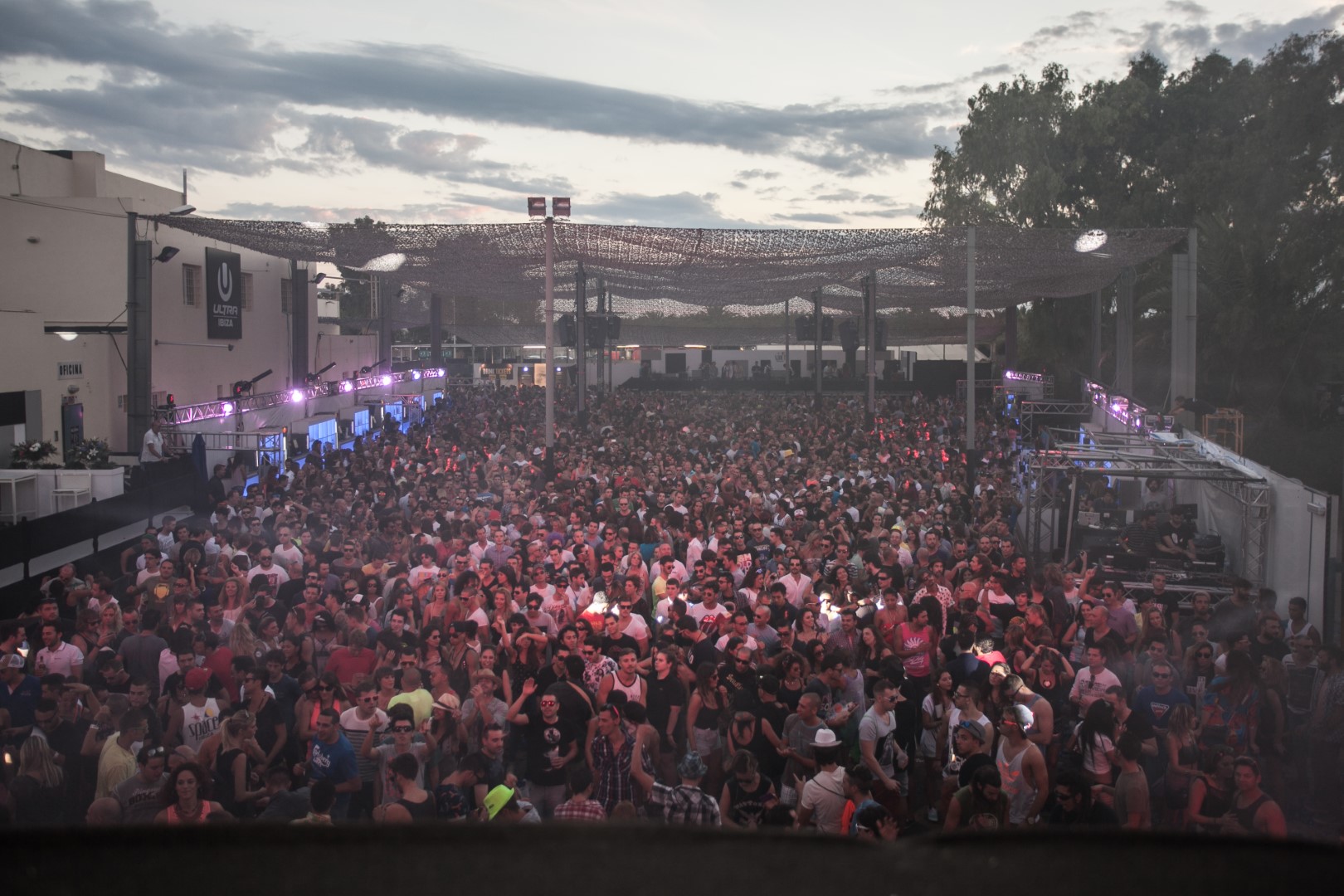 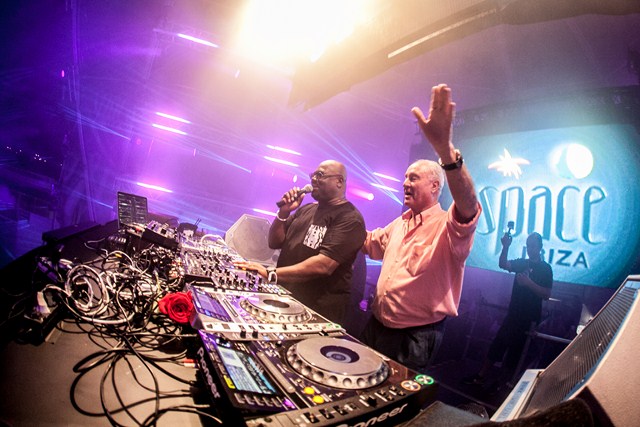 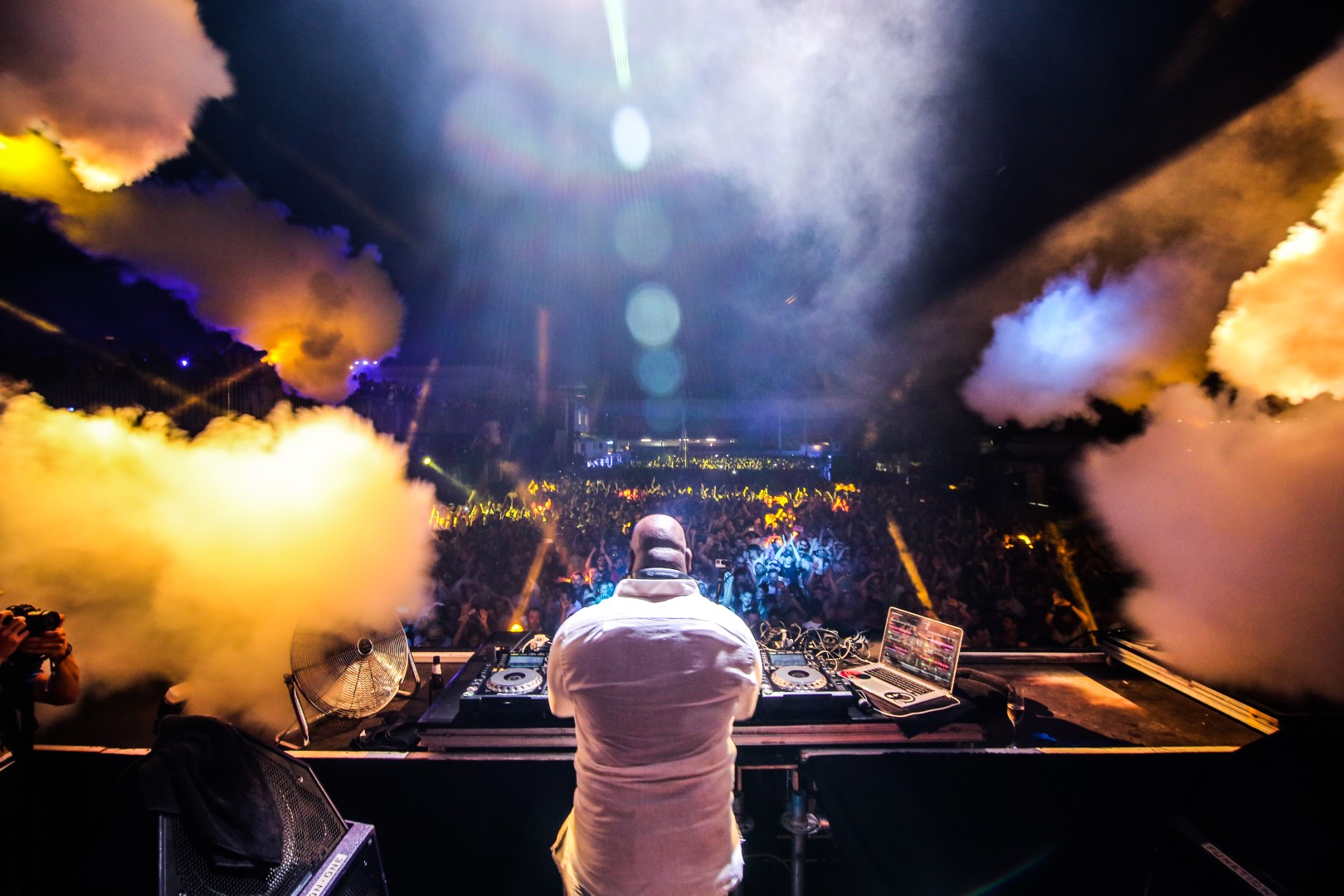 In the first decade of the XXIst century, with the change of laws moving the day programme to evening hours, Space Ibiza has consolidated its position as a worldwide reference for dance culture, with a varied schedule including all sides of electronic music. The club offers 5 different rooms with a sound system which for several years has been named the best in the world in the IDMA, an impeccable production at each of the different daily parties, and a special programme including concerts and live performances by the main national and international DJs, bands and producers, who regard the club as “the Mecca of electronic music”.

Reacting to the audience demand, VIP areas were opened so as to enjoy the Space Ibiza experience with the highest possible comfort. These areas were located in preference places so people would not miss a bit of what happened at the best club in the world every evening.

The constant dedication and improvements in these 27 years have made Space Ibiza the most awarded club in the world. These recognitions vouch for the work and excitement in the Space Ibiza project and the love given by an unconditional audience year after year. They have never been looked for, but they have arrived as a reward, and, as it should be, the club is immensely grateful for them as they push it to excel when every new season arrives.

Space has made history as a leader in the landscape of global electronic music, one of the best clubs in the world and the undisputable center of reference of the industry.

Space is a globally recognized brand.